The Jew’s Ear fungus is one that I was on the lookout for, and came across it by accident. It’s quite unique looking and has been used in food and medicine for a very long time. 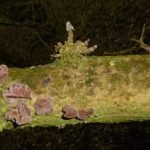 The name “Jew’s Ear” probably came about as a corruption of the original “Judas’ Ear”; Which in turn, was probably from the belief that Judas hung himself from an Elder tree. Nowadays, it is considered not politically correct, so it is often referred to as Jelly Ear or Wood Ear. Other names it has had include: Ear Fungus, Common Ear Fungus, Chinese Fungus, Pig’s Ear, Black Wood Ear, and Tree Ear.

Jew’s Ear is safe to eat, and has a mild, even bland flavour. It has a soft, jelly-like texture, although older specimens can become quite chewy.

The fruit is used quite widely in Asian cooking, because although it doesn’t have a strong taste, it absorbs other strong flavours quite readily.

In the UK, it is mostly found on Elder trees, but has also been found on Beech, Ash and Spindle Wood. It can grow both singly or in a group and it reacts to the weather; After rain, the fruit swell up and look their most ear-like; After a dry period, the fruit shrivel and are much harder to find. 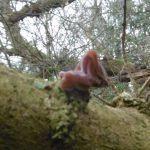 They can be pink, pale brown, often with a purplish hint when young, turning dark brown or even black when old. They’re between 3 and 8 cm, and ear shaped, sometimes cup shaped in young fruit. Often covered in downy hairs, sometimes the wrinkles resemble veins, making them even more ear-like.

They usually develop new growth in January, so late winter/early spring can be a good time to look for them; Especially after rain, as they tend to fill out a bit when wet.

Jew’s Ear has been recorded as having been used for food from ancient times in China, as well as other parts of Asia, Africa, and Poland. It is often cooked in soups and used dried to thicken stews.

This fungus has a much stronger background of folk medicine than as food. It has been used as a poultice to treat eye infections, and as a palliative to treat sore throats. In the sixteenth and seventeenth centuries, it would have been boiled in milk or steeped in beer to produce the throat medicine.

In China it was used as a soup to treat colds and fevers, and more recently, in Ghana as a blood tonic.

Some research has been done into the medicinal attributes of Jew’s Ear, the most noteworthy including: It was investigated for use as an anti-tumour, but the glucans extracted from it were ineffective (1). However, a more recent study in the 1980s showed that they were effective (2). A polysaccharide extracted from it has been shown to have a hypoglycemic effect and could be used in treating diabetes. Other chemicals extracted from it have had anticoagulant abilities and have been shown to lower general cholesterol levels, particularly LDL cholesterol (3).

As a “trail food”, that is, something you can pick off a tree, clean and eat, it can be quite a good gum substitute, and the anti-cholesterol properties are not to be ignored.

Dried, it can be added to all sorts of stews and sauces to thicken them, as an un-processed alternative to flours, because of it’s absorbent abilities.

My favourite use, second to chewing on them raw, is as an ingredient in Hot and Sour soup. If I ever find enough of them in a place where I’m allowed to collect them, I’ll let you know how it goes…

To help support the foraging community we've released a shared foraging map - you can pin locations and add specific details on the items you found..
A new Pin for Wild Angelica has just been added in Cheshire..
Check it out here or add your own pins :)
https://totallywilduk.co.uk/the-foraging-map/?platform=hootsuite&utm_campaign=HSCampaign

One of the many piles of Peacock butterfly caterpillars feeding on their favourite food, stinging nettles (I'm quite partial myself!).
#eppingforest #London #nationalparkcity #foundfood #totallywilduk #butterfly… https://www.instagram.com/p/CBd4zdxnywM/?igshid=1lxfy5m0d4cgu

One of the many piles of Peacock butterfly caterpi